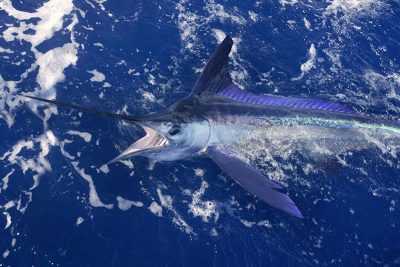 The water around Mauritius supports a healthy population of blue and black marlin. Shoals of yellowfin tuna (65 – 90 kg) move into Mauritian waters in March and April while wahoo, said to be the fastest swimming fish in the sea, are prominent in September. Other challenges for anglers are the spectacular sailfish (around 45 kg), which flies through the air when hooked in an acrobatic display of anger; bonito, a small species of tuna; and blue, hammerhead, mako, tiger and black and white fin shark. Boats come equipped with a radio and trolling equipment for live bait and artificial lures. Large fleets can be found at Le Morne Anglers Club in Black River (South West) at 5 minutes drive from the villa. The Villa Manager will be pleased to organise your big game fishing experience.